Helping doctors find the right partner, at their own pace

Sign up below and complete the verification process to avail of your complimentary membership plan until 31 Dec 2021.

#LoveForDoctors: In the form of a ₹3 crore giveaway

We are giving away 10,000 complimentary Quick Connect membership, through the end of 2021, to single doctors and medical students.

No catch. No gimmicks. No strings attached.

Just another way for us to show thanks as an organization striving to do good for society in our own modest way.

Any single individual, whether never-married, divorced, awaiting divorce, or widowed, can sign up and get matched for free on Jodi365.

If are a single doctor or med student, you can go one step further. Verify your identity and professional credentials (within our platform) to avail of the complimentary membership plan.

Do hurry, though, as the free memberships expire on 31 Dec 2021. That is, whether you join on July 1 or October 1, you will have only until December 31 on the complimentary Quick Connect plan.

So, the sooner you join, the more you can take advantage of our special offer for doctors.

Of course, you'd have to be not only single, but also emotionally ready.

If you are ready, then there's no better platform than Jodi365, through which to find the right partner, at your own pace.

1. Shouldn't I be worried about signing up on an online matchmaking platform?!

It is a sad reflection of our times that genuine people must understandably be wary, given the widespread mischief that happens on even leading matrimonial sites. (Let's not even get into the casual dating apps.)

You may be better off erring on the side of caution. Yet, as we like to say, about life and matters of the heart, "Nothing ventured, nothing gained."

We understand your concerns. It is why we have put together this subset of FAQs: ANY WORRIES/CONCERNS?

Need something else cleared up? You are welcome to CONTACT US.

2. How is Jodi365 different from the competition, really?

There is no shortage of competition in the matchmaking business. Matchmakers have been in existence for probably as long as humans have sought to enter into relationships. Our competition also includes traditional, matrimonial sites for the marriage-minded; the so-called "marriage bureaus"; and newer, casual-dating apps.

Fundamentally, Jodi365 is not a typical matrimonial site. It is not a frivolous dating app, either. Rather, it is a thoughtful hybrid that helps quality singles find the right match, at a pace that's right for them. Jodi365 is primarily a self-service online platform; yet, we also provide personalized matchmaking assistance to those who value the expertise and guidance on offer from our team of relationship managers.

See the Jodi365 HOME PAGE and ABOUT US, which expand on our points of differentiation.

Jodi365 has been live since 2011. Yet, it has consciously been a niche, premium platform for quality singles, rather than a "come one, come all" site with the kinds of problems and user grievances on most other platforms.

In our focus on quality rather than quantity for quantity's sake, we are content with a smaller user base than that on sites and apps that aim to be everything for everybody. That said, we are growing briskly (10,000+ new users a month), and are excited about introducing Jodi365 to many more quality singles in the weeks and months to come.

Jodi365 is a freemium platform, in that it lets users do a number of basic things for free, with the option of upgrading to paid membership plans for additional features and benefits.

For instance, one may like and thereby express interest in a limited number of matches daily for free and also reciprocate interest for free. Once there is mutual interest, one may reply for free to chats initiated by a match.

Just as banks and even the Indian Railways charge a convenience fee for expedited services or bookings, we offer our users a variety of value-added services to expedite the process of finding and connecting with matches. These take the form of Quick Connect, Express Connect, and Assisted Connect subscription plans.

Subscriptions range from a discounted (because, Covid!) ₹1,999 for a 3-month Quick Connect plan to ₹119,950 for 12 months of our Personal Touch service.

For details on the various plans, including a comparison of the features and benefits, please browse the stand-alone FAQs section.

If you love our values and approach and want to wire us money, sure, CONTACT US.

5. Who are your investors?

After consciously bootstrapping our business for over nine years, we raised a seed round of funding and are excited about the growth path that lies ahead.

Visit the ABOUT US page for more information about our seasoned group of investors and advisors.

6. Does Jodi365 cater to any particular region, religion, or community?

Our brand identity, Jodi365 derives from jodi, which means match, pair, or couple in just about every Indian language. It was consciously chosen, so that our platform speaks to people of diverse religious views and cultural and linguistic affinities.

We understand that similarities matter, especially when it comes to finding the right partner. However, unlike typical matrimonial sites, we don't entrench cultural distinctions. Rather, we let our users define their cultural identity in a way that's meaningful to them, e.g., religion, language, ethnic/national origin, community, and any combination thereof.

You can expect to find on Jodi365 people who are Hindu, Muslim, Christian, Sikh, Jain, Buddhist, Parsi, and with other religious views or even no religion.

One common denominator in our users, regardless of their socio-cultural background, is that they are drawn to Jodi365's tag line: for quality singles!

Also, Jodi365's parent company, FreeElective, currently has a corporate presence in the US and India. Our users come primarily from India, the US, Canada, the UK, southeast Asia, the Middle East, Australia, and other countries with sizable Indian/South Asian communities. As our footer section says about Jodi365: Conceived in Chicago. Created in Chennai. Catering to educated Indian singles worldwide.

The process of using Jodi365 to find and connect with the right match requires that one first create a user account and, at a minimum, verify their mobile phone number.Then, one has to complete our detailed profile questionnaire, describing not only themselves but also their partner preferences. Profile privacy settings give the user the option to hide one's pictures and some sensitive profile details (including income) until they feel comfortable revealing them to matches.

Once a new user's profile is manually screened and approved, the user may browse recommended, mutually-suitable matches.

For new users who opt to receive personalized matchmaking assistance, we provide handholding from the start, through our team of relationship managers. The assistance includes screening suitable matches and reviewing handpicked matches every week, connecting with select matches on one's behalf, and making personal introductions as appropriate.

For more information about our personalized services, see: ASSISTED CONNECT and PERSONAL TOUCH.

8. Anything else that I should know?

Our mission is lofty — to help people find a compatible match, to help them celebrate and nurture their relationships through all seasons of life, and thereby to make meaningful contributions to society.Jodi365.com is our flagship, matchmaking platform. Yet, we recognize that finding a match is just the beginning.

So, we are also introducing Peepul365.com, a complementary event-planning platform and marketplace that helps people discover beautiful venues, browse stunning ideas, connect with curated vendors and service providers, and plan weddings, receptions, and other special events – with due consideration to Covid-19, of course.

See the bottom of this page for ways to get in touch with us for more information.

Jodi365 is not a typical matrimonial site. It is not a casual dating app, either. It is a thoughtful hybrid that helps quality singles find the right match, at a pace that's right for them – whether they are ready for marriage in the near term, or want to get to know someone as friends first.

Bringing people together since 2011
And many more matches happening every day!

Our motto: Useful. Classy. Trustworthy
You'll love saying you were matched by Jodi365!

We help people find the right partner, at their own pace – whether they are ready for marriage or want to get to know someone as friends first. 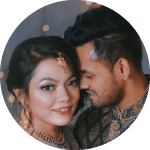 For those who are ready to tie the knot within months of finding a suitable match. 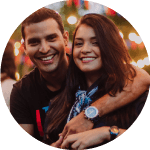 For those who may be ready for an engagement and would prefer a courtship period before tying the knot. 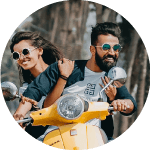 For those who are looking for a meaningful relationship, but want to start as friends first.

Jodi365 has been serving single Indians and their involved families, worldwide, since mid-2011.
Here's why people look to Jodi365 to find a suitable match: 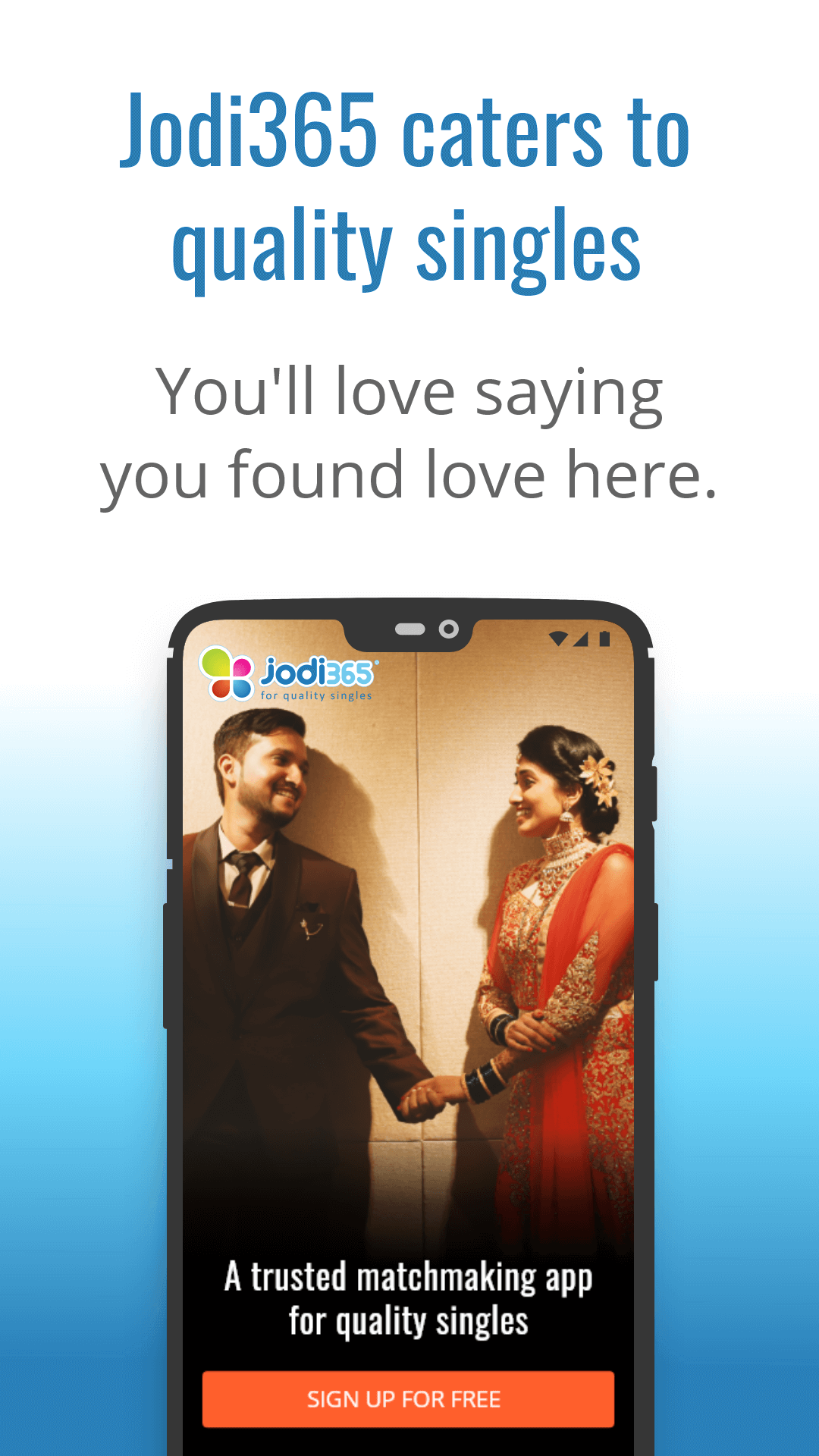 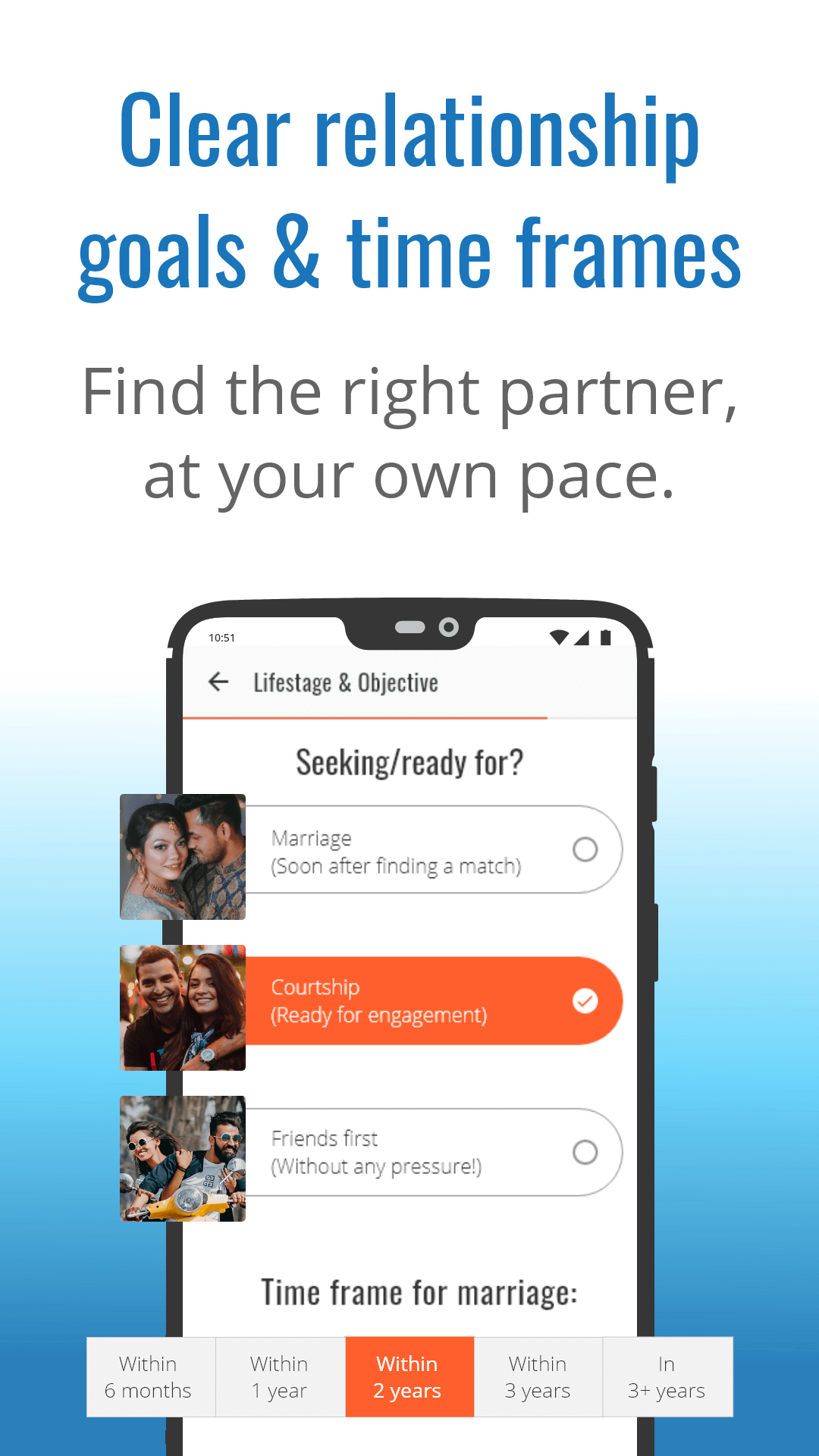 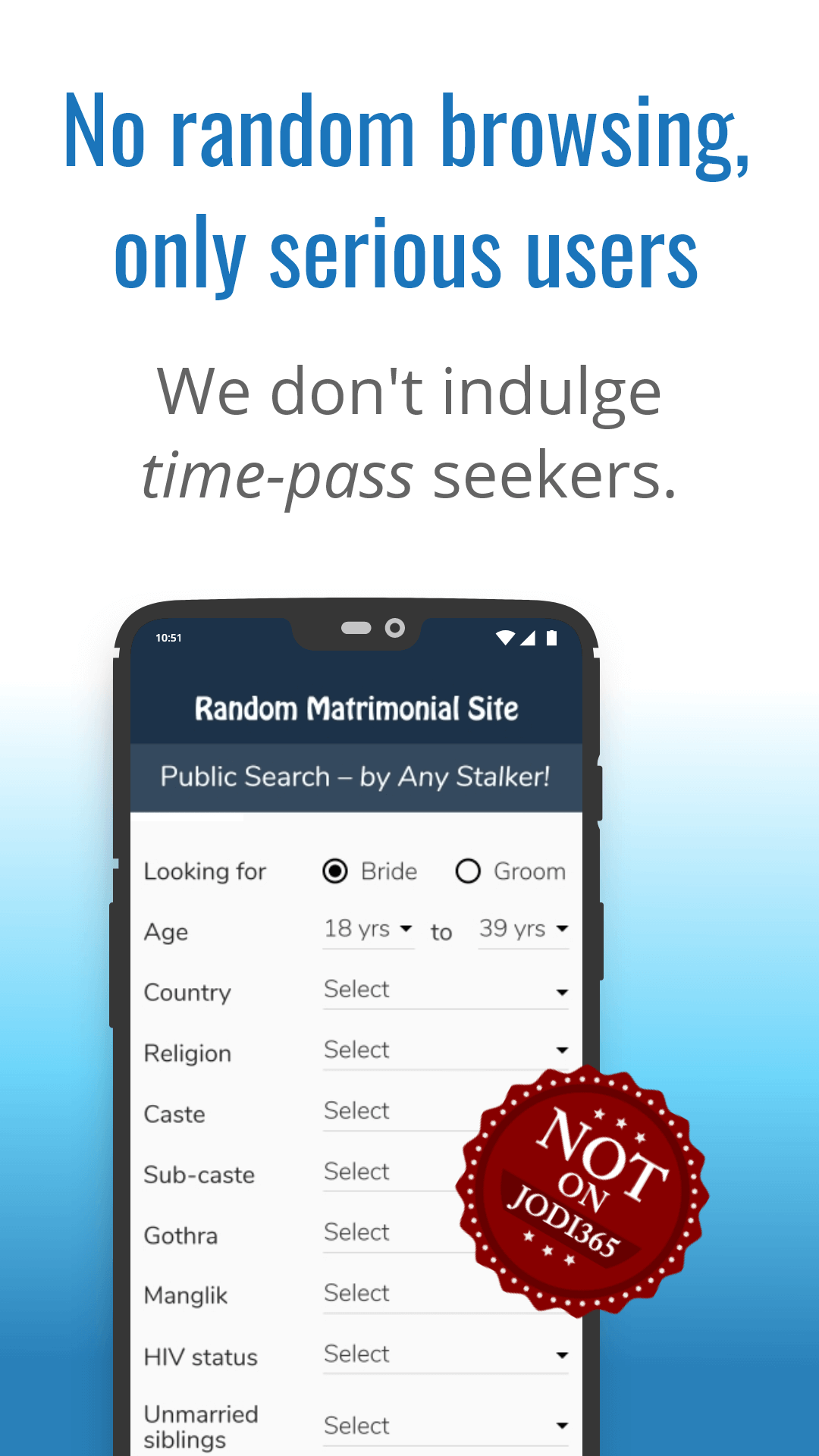 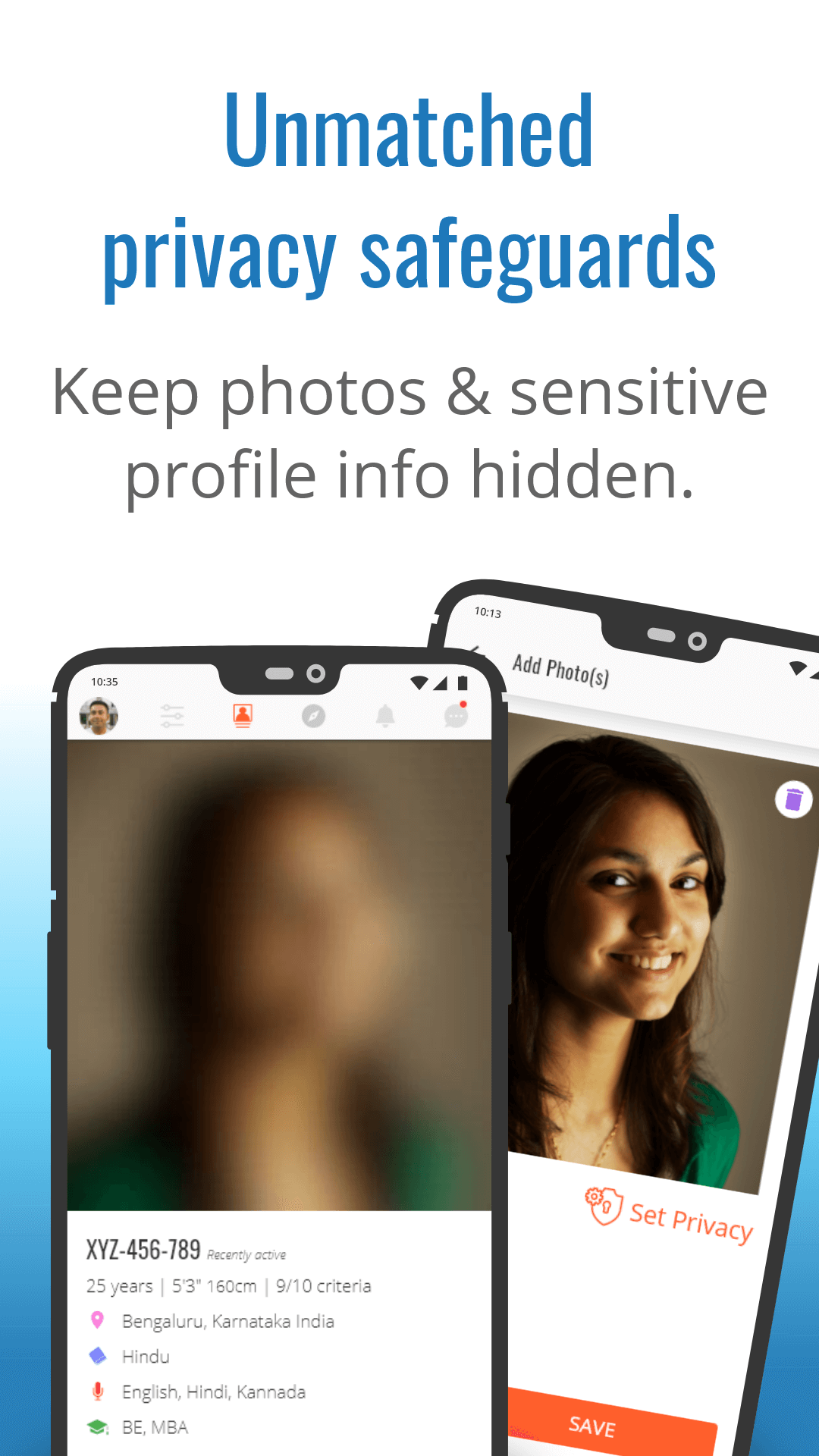 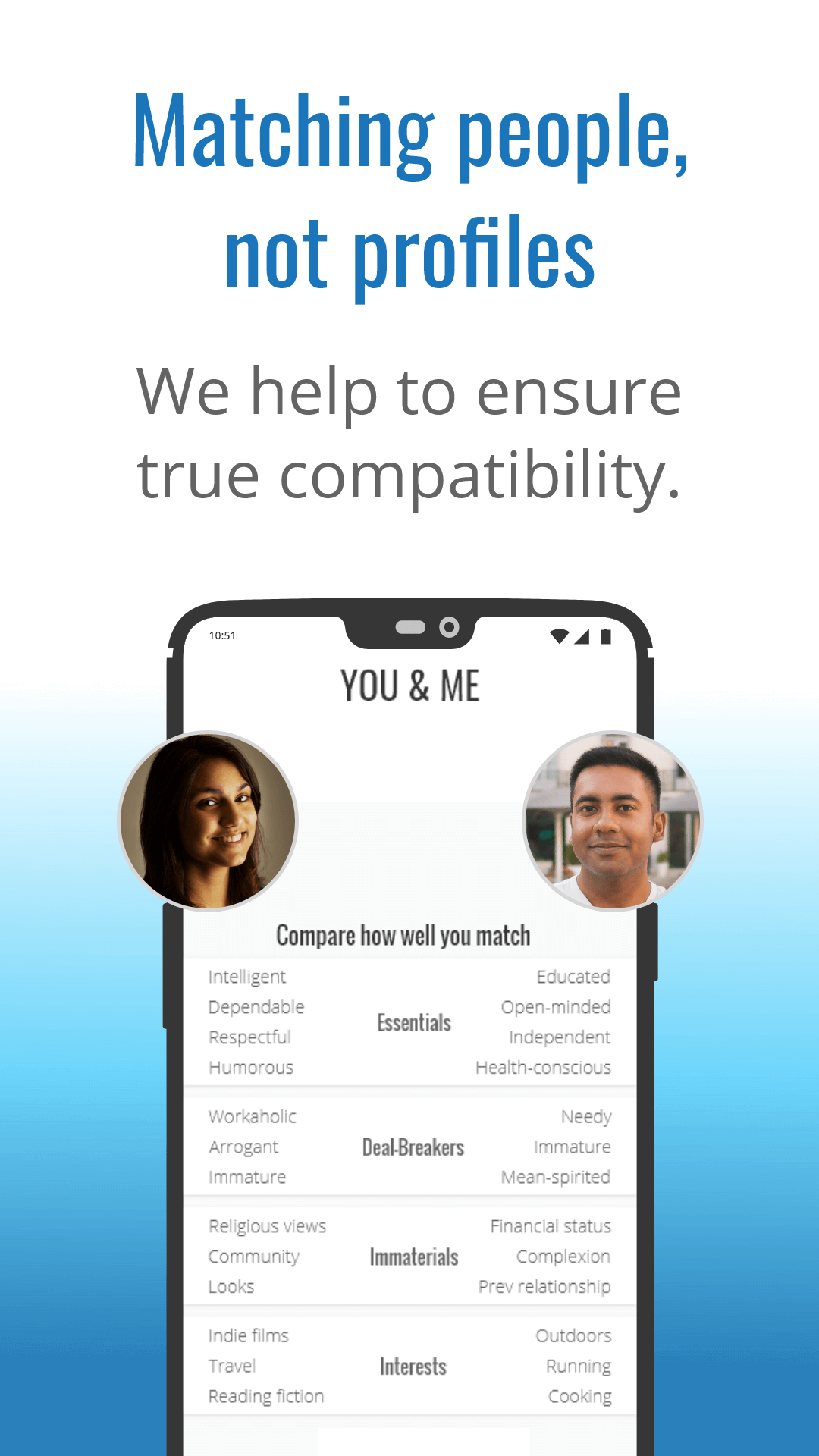 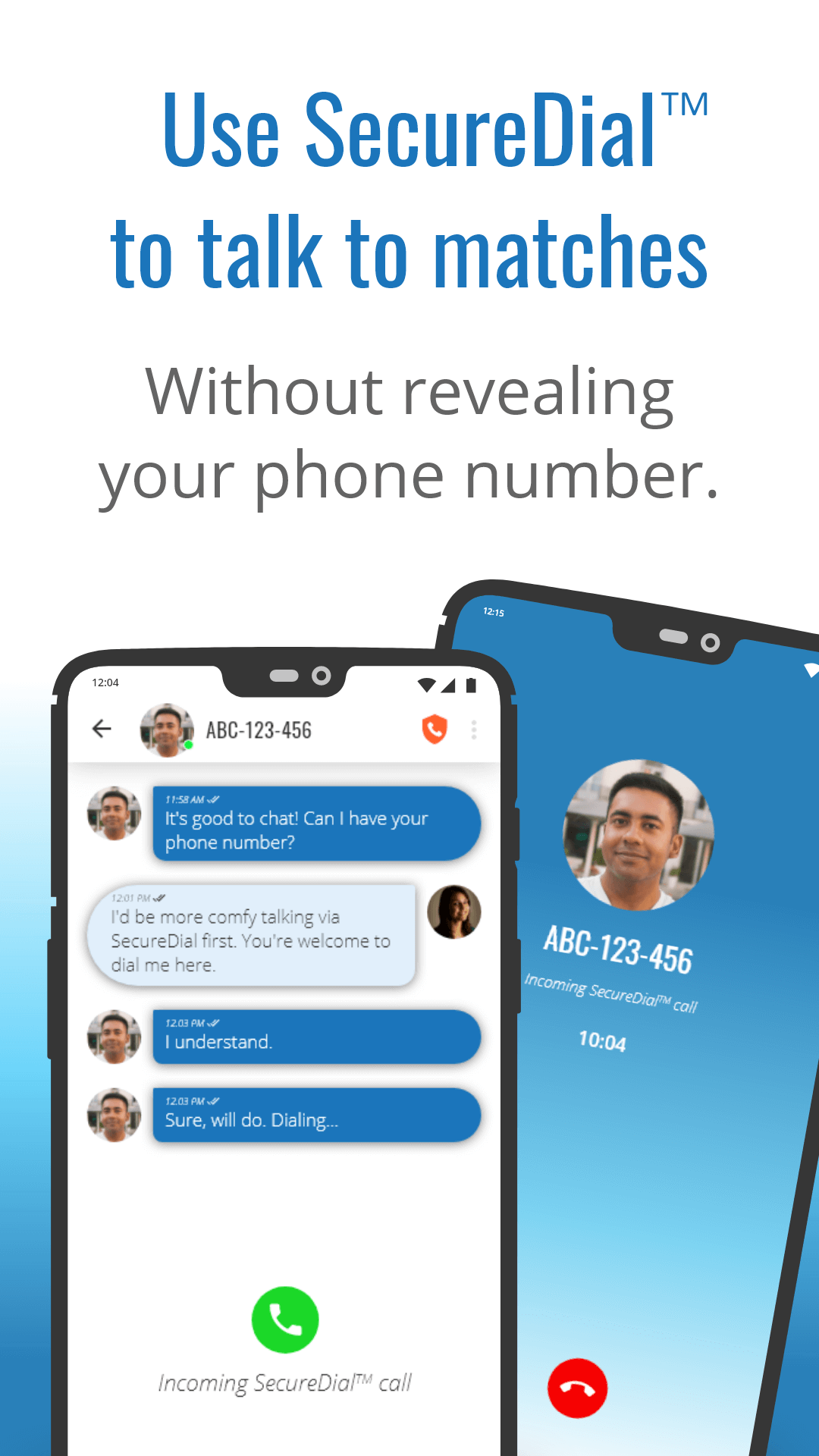 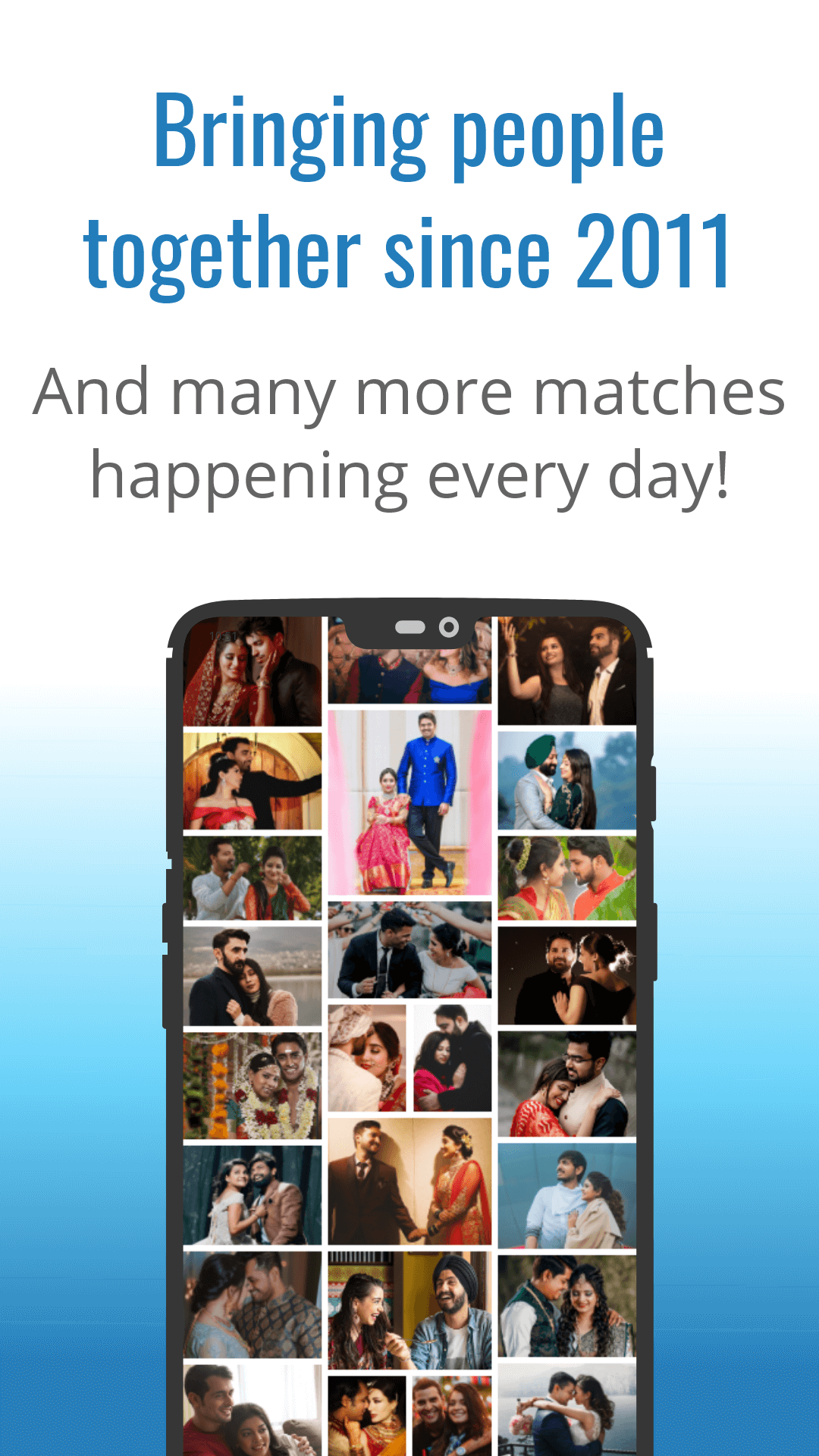 Hear Namrta describe how she found her life partner, on Jodi365, in less than a week.

Design & prompts on Jodi365 are brilliant, says Apoorva, who signed up after a recommendation.

Detailed and "beautiful" questionnaire, and Jodi365's approach amazes this user.

"Daughter's friends got their matches on Jodi365," leading hopeful father to sign up here.